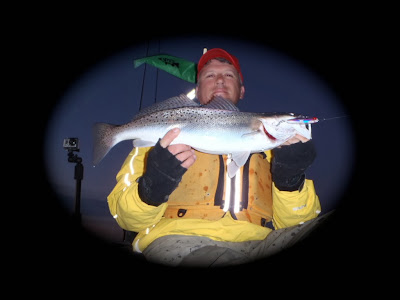 ​
My quest for that elusive first saltwater citation almost came to fruition this past Monday. Forecasts indicated yet another small craft advisory for the peninsula region and cooler air temps in the morning, only this time it was reserved for the Eastern Shore area and not so much for the inlets and bays in the Tidewater area. Winds were supposed to lay down by midday and shift to out of the SE as the afternoon progressed. So, having the day off, what better way to celebrate this past Veteran's Day as a veteran myself than to go fishing?

I was also equally anxious to get out and try my new custom spinning Spectrum Professional series inshore rods by Bull Bay Rods. I ordered two of them - one in blue and one in red. I paired the blue one with my Stradic 3000FJ and my Stradic CI4 to the red one. I headed out to a nearby tidal flat known to many trout anglers in the region in search of a citation class speckled trout that has eluded me thus far this year.

I traditionally use only PTL plastics, but on this day, I promised myself that I would utilize the best trout catching lures on the market - the world famous MirrOlure (Series III and an XL) and of recent popularity, the Rapala Skitterwalk which was tied on already to my other custom Bull Bay casting rod. I launched at 4:30am into a dead calm and a slack tide. Flood had already maxed, so I knew I needed to pedal efficiently but with a purpose if I wanted to make the flats for the first couple hours of of the ebb tide.

I made my way to my target area, trolling the Skitterwalk along with a few subtle twitches every now and then on the off chance a hungry predator would blowup the surface walker. Not even a swipe or halfhearted miss. As I neared the creek mouth, I saw the ebb had already begun, so I knew my chances were right now. I reached back and pulled the "blue arrow" from my rod quiver and fired off a rocket cast across the mouth of the creek. Right away, I noticed how effortless it was to make a snap cast and have it travel a good 40 yards into a slight NNE breeze.

I was so pleased with my choice of rods that I didn't even feel the hit on the MirrOlure XL. Once my haze of satisfaction wore off, I immediately felt the surge of a very large predator fish on the end of the line. Drag started steadily leaving the bail but the fish gained no leverage on me. The new Spectrum held it's own and just held the feisty creature at bay. Even with strong surges to try and escape, the Spectrum loaded perfectly and turned the predator right back to me. The fight was over almost as quickly as it had begun. It felt like an eternity, but in actuality lasted a faint 45 seconds in total in real time.

A slight re-direct of the beastly speck at the side of my Pro Angler, a quick wrap of the leader around my hand and a smooth hoist into the footwell. I looked down and thought to myself wow while simultaneously letting out a triumphant "YES! Booyah Baby! That's more like it!" I was anxious to get this monster trout on the measuring board to see if my quest had been fulfilled. I lined the trout up properly with the nose to the zero line and laid the tail naturally. My eyes panned the length of the body in awe of the shear girth and size of this beastly speck. My eyes neared the point of no return as I scanned the black hash marks for the singular hash longer than the other 1/4" increments and felt a glimmer of hope creep into my soul as I gazed at the magical mark of 24", and......

Uggghh! So close.....a whopping 1/4" short! You have got to be kidding me! I checked and rechecked just to be sure, but I felt it was short and no way was I going to cheat myself or the VMRC Saltwater Tournament program by pinching the tail and making the fish a citation. I snapped a couple photos and let the speck swim away to grow that last 1/4" to become citation class. While I was disheartened a little, this was my largest speckled trout to date so far. 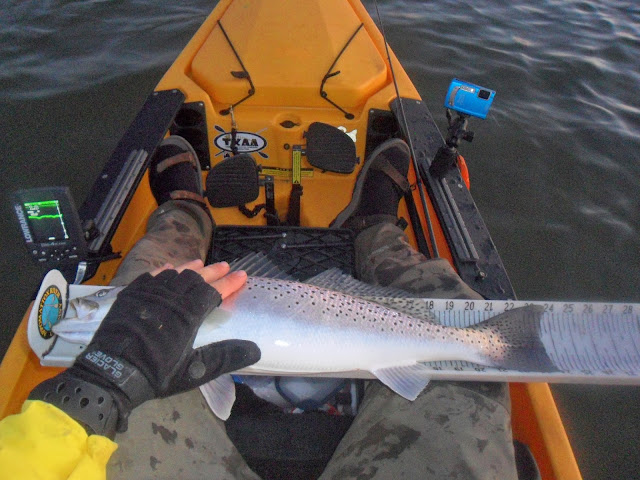 ​
I made a few more casts to the same area but didn't get any more hits, so I moved to the other side of the creek mouth and worked the opposite direction - no luck. After 30 minutes of working that area with no signs of additional life, I moved around the point of the flat, beached the Pro Angler and waded out nearly 50 yards from shore into two feet of water. I started making some more casts across the flat with the "blue arrow" as it felt more balanced that the "red arrow". I alternated casting periods between the Skitterwalk and the XL.

After about a half hour of doing this, another fish strike occurred, only this time the bite felt different. The fish didn't put up much of a fight at all. After a real short fight, the guilty culprit emerged from the watery flats - a less than healthy looking redfish. I lipped him and waded back over to the Pro Angler to get a picture. If was only then that I noticed that he had a portion of his dorsal fin torn away with the wound still showing signs of blood, and there were noticeable linear scars and bruises on his body - most likely the result of getting caught up in a net if I had to venture a guess. 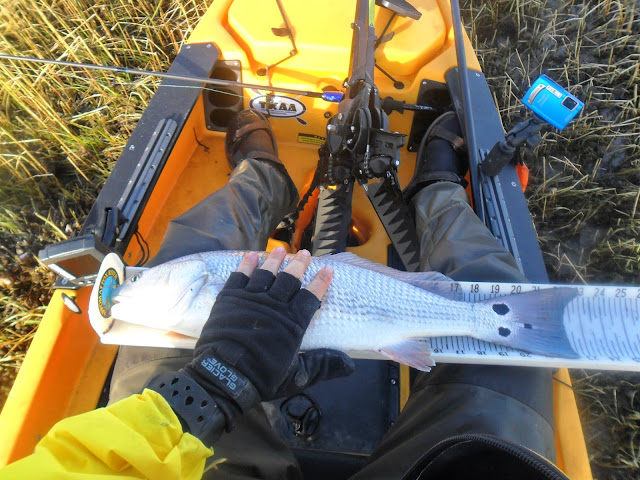 ​
Nevertheless, a fish is a fish, and this portly slot red measured in at a nice length of 23". My largest redfish of the year, and he too was released to go and grow even bigger. Both of these fish were caught on the ebb tide and prior to 9am. I kept working the flats for a total of nine hours on the day with no more fish to show for my efforts. While the citation class speckled trout eluded me on this day, I could leave knowing I had accomplished a few of my goals for the day.

First, I was able to test out my two new Spectrum rods from Bull Bay Rods. Second, I was able to dedicate my fishing styles on the day to utilizing Skitterwalks and MirrOlures - two methods I could use the practice in. Third, I fished my target area from every possible angle managing only two fish, but they were both the largest saltwater fish caught this year for me. Fourth, I was able to put my new rods to the test not only in casting but also in under load and during the fight. A detailed review is forthcoming later this year after I have had several outings under my belt.

Am I disappointed - sort of, then again I know I will come back once the water warms in the spring and target the flats yet again. I can always chase the big trout in some nearby waters as old man winter rears his ugly head, but I will turn my attention most likely to the striped bass and tautog that are now on the loose in our neck of the woods.

Hope you found this tale entertaining. I know next year where to go and what to use. It is only a matter of time......

Here's the video of the now infamous near citation speck......
Tight lines!
B

wish they all read like that. thanks for the effort
S

Joined Dec 13, 2011
·
75 Posts
Awesome report and nice fish! How cold does it have to get to run the trout and reds out of the area? I'll be home from school next week and was wondering if it would be worth it to try some shallow water instead of trolling for rocks.
B

Sam H. said:
Awesome report and nice fish! How cold does it have to get to run the trout and reds out of the area? I'll be home from school next week and was wondering if it would be worth it to try some shallow water instead of trolling for rocks.
Click to expand...

Sam - there are always resident trout as some of the locals will possibly tell you. They key to catching specks year round in understanding their feeding habits relative to the area they frequent. The transient ones have already moved on and are heading for their winter holes. Your best bet now is closer to the HRBT and look for structural changes where they can ambush prey as the current switches.
C

blizzard said:
Great report and nice fish! Did you launch at the Ware House road ramp?
Click to expand...

Thanks - no. The beauty of having a kayak is you don't need a formal ramp. Just pull off the side of the road where allowed, park and launch. But Ware House would have been a place for me to launch to get to this spot yes.

Entourage said:
Can't you pinch the tail ? I thought that was how vmrc would do for a slot fish. Am I wrong? if so please tell me.
Click to expand...

You can do that, but I fish several online and in person kayak tournaments that are CPR (Catch Photo Release), and they all measure the same way. Natural lay of the tail, so for me, I want my first citation to be a no doubt oh hell yeah that's a beastly freakin' gator mouth wicked fanged speckled trout kind of fish :thumbup:.
1 - 14 of 14 Posts
Join the discussion
Continue with Facebook
Continue with Google
or sign up with email
About this Discussion
13 Replies
11 Participants
Last post:
Hanover_Yakker Nov 14, 2013
Tidal Fish Forum
A forum community dedicated to Mid Atlantic fishing and sporting enthusiasts. Come join the discussion about safety, licenses, tips, tricks, piers, reviews, accessories, classifieds, and more!
Full Forum Listing
Explore Our Forums
Chesapeake Angler - The Original- Maryland Angler Virginia Angler Mid Atlantic Offshore Angler Crabbers Northern Neck Virginia Angler
Recommended Communities