Court documents: Feds investigating Casey's Seafood on mixing Atlantic blue crab with cheaper imports
NEWPORT NEWS - Federal investigators are looking into whether a Newport News seafood company falsely labeled crab meat from foreign waters as Atlantic blue crab and a "Product of the USA."
No charges against the company, Casey's Seafood Inc., have so far been filed.
But court documents in U.S. District Court in Norfolk indicate that federal investigators believe Casey's mislabeled crab meat at its warehousing facility in the Newport News Small Boat Harbor - then passed it on to Farm Fresh, Harris Teeter and other retailers.
A federal search warrant was executed on June 17 at Casey's, located at 807 Jefferson Ave., in a search led by Special Agent Christopher McCarron, an investigator with the National Oceanographic and Atmospheric Administration (NOAA). 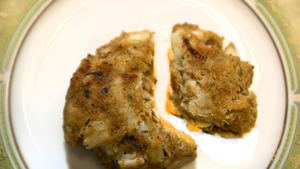 Agents removed items from the seafood house, including purchasing records, billing records, and many crab meat containers, including 17 bags labeled "Product of Vietnam."
McCarron wrote in a search warrant affidavit that the "high demand for domestic Atlantic blue crab had caused an increase in price," and that "confidential informants and individuals in the business" had told him Casey's Seafood was using "less-expensive foreign crab meat" in order "to undercut the market."
"In June 2014, I received information from private individuals regarding Casey Seafood Inc. substituting foreign crab meat for domestic Atlantic blue crab ... and falsely labeling it as 'Product of the U.S.A.,'" McCarron wrote in the sworn statement unsealed Friday.
Casey's Seafood - owned by James Casey and operated with his sons, Greg and Mike - employs 12 full-time employees and "at least 50 crab pickers" during peak season, the affidavit said. The company buys, packages domestic and foreign crab meat, and sells crab cakes, crab parts and minced crab meat.
lRelated 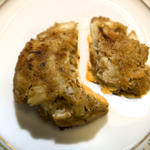 Testing the crab meat
But according to McCarron's affidavit, some of the crab meat the company passes off as being a "Product of USA" did not have any crab from U.S. waters, and instead came from Indonesia and elsewhere. Some was a mixture of foreign crab and Atlantic blue crab.
The affidavit said DNA testing was done on Casey's crab meat purchased late last year and early this year in Virginia, North Carolina and Delaware.
In September, the affidavit said, Virginia Health Department inspectors bought Casey's crab meat from area retailers, including three 16-ounce containers of fresh "Backfin-Blended Lump & Flake Crabmeat."
Though it was labeled "Product of USA," the affidavit said, two of the three containers contained only "Swimming crab," which are not found in U.S. waters, while the third was a mixture.
Crabbing in Hampton Roads
<img itemprop="image" data-baseurl="http://www.trbimg.com/img-5109bc8e/turbine/hr-dp-buyboats-congrete20100818080945" alt="Oyster and crab harvesting buyboats" class="trb_embed_imageContainer_img" title="Oyster and crab harvesting buyboats" data-content-naturalwidth="600" data-content-naturalheight="450">
Blue crabs, oysters, fish - harvesting from the rivers and ocean is a integral part of living in the Tidewater region. Here's a look at crabbing the waterways of Hampton Roads.

Also in September, NOAA agents bought Casey's "Product of USA" crab meat at eight retailers - three in Newport News, two in Williamsburg, one in Virginia Beach and two in Delaware - and sent them for testing at a Maryland lab.
"Seven of the eight containers &#8230; contained foreign species of crab not native to the United States and not found in domestic waters," McCarron's affidavit said.
One of the packages, bought at a store in Newport News, had all-U.S. crab, while one had all foreign crab, the affidavit said. The rest were a mixture that included a crab species "found in the western Pacific Ocean, near Indonesia."
In December and January, the affidavit said, NOAA agents bought six Casey's Seafood containers at retailers in Newport News, York County, and northeastern North Carolina. Four of the six containers marked "Product of USA" contained foreign crab meat, the statement said.
McCarron added that he bought a one-pound package of Casey's "Product of USA" crab at a Virginia store in May that also turned out to have foreign crab meat.
"Based on the results of the laboratory analyses listed above, I believe that Casey's Seafood Inc. substitutes foreign crab meat for Atlantic blue crab" in violation of the federal Lacey Act, country of origin labeling requirements and misbranding laws, McCarron said.
Jim Casey, 71, of Poquoson, could not be reached for comment Friday, while Mike Casey did not return a phone message at his office phone and Greg Casey could not be reached.
A receptionist who answered the door at Casey's Seafood Friday said there was no manager or other person a reporter could speak with. She said she was working on payroll checks for crabbers and didn't know anything about the search last week.
A local attorney, Lawrence M. Woodward Jr., later called to say he had been retained by the Caseys to represent them, but that he didn't have an immediate comment because he had not yet seen the affidavit. "I advised them not to make any statements," he said.
Legal, business implications
Assistant U.S. Attorney Eric Hurt, with the federal prosecutors' office in Newport News, is heading up the prosecution. But Joshua Stueve, a spokesman for that office, declined to comment on whether any charges are pending.
One regional supermarket chain, Harris Teeter, says it has already removed Casey's products from all its stores in Virginia and in six other states.
"We were extremely disappointed and frustrated by the news of these allegations, and we will do everything we can to assist in the investigation," said Danna Robinson, a spokeswoman in Harris Teeter Supermarkets' corporate office in North Carolina.
"As soon as we became aware earlier this week, we immediately removed all Casey's Seafood product from our shelves, and we are no longer sourcing from Casey's Seafood," she said.
Farm Fresh has also pulled Casey's product. "We were contacted by the vendor this week about potential labeling issues with this product, and we voluntarily decided to remove all of their products from our stores," said spokesman Luke Friedrich.
Cracking down on fraud
In July 2014, three Virginia lawmakers - Sen. Tim Kaine, Sen. Mark R. Warner and U.S. Rep. Rob Wittman - and Maryland Sen. Barbara Mikulski sent a joint letter to President Barack Obama urging the administration to crack down on seafood labeling fraud.
"Domestically harvested crabmeat is competing against the less expensive foreign crabmeat fraudulently labeled as a 'product of the United States,'" they wrote, according to press reports at the time. "Deceptive labeling misleads customers and threatens the livelihood of the watermen in our states."
The Newport News action comes a year after Obama did establish a federal task force to go after illegal fishing and seafood fraud - and nearly three months after the international advocacy group Oceana released the results of its investigation into the mislabeling of Chesapeake blue crab.

For their study, Oceana researchers bought 90 crab cakes that were marketed, served or sold as the more expensive Chesapeake blue crab by restaurants in Maryland and Washington, D.C, and had them DNA-tested.
The results showed that 38 percent of those crab cakes either weren't Chesapeake blue crab at all, or were a mix of the iconic bay species with a cheaper crab, often imported from China or Indonesia.
lRelated

"For the watermen who work in the Chesapeake Bay, they're selling their crab into a market that's flooded with mislabeled product," Beth Lowell, senior campaign director at Oceana, said Friday.
The Chesapeake blue crab is one of 16 "Callinectes" blue crab species that are found along both coasts of the Americas and the Gulf Coast. The iconic Chesapeake blue crab is native to the Chesapeake Bay, and consumers are willing to pay a premium for it.
Oceana's report claims that fraud is endemic and oversight is lax as the U.S. now imports the vast majority of the crab sold here as "Callinectes."
In fact, the group says, 90 percent of the imported crab labeled "Callinectes" comes from Indonesia, China, India, the Philippines, Vietnam and Thailand - places where the species isn't even found.
When Oceana announced the results of its investigation, Hampton businessman Johnny Graham, owner of Graham & Rollins Inc., said he knew there were "bad actors" mislabeling blue crab in the seafood trade.
"It is deliberate," Graham said in April. "There are people out there that are violating it deliberately. I know a few of those as well. And there's never really been a way to discern our crab meat from other crab meat, and that's why it's been a very lucrative proposition."
"But, as we're learning now," he said, "there are ways to detect a difference, and some of those folks that are acting in a fraudulent manner may soon be called out, and it's not going to be a pretty time."
Past problems
This isn't Casey's Seafood's first incident involving the labeling of his crab meat.
A news story in the Daily Press in 1997 reported that a state health inspector walked into the crab packing room at Casey's that year as workers were scooping Mexican crabmeat into containers labeled "Chesapeake Bay's Finest Crabmeat."
The inspector also said he found empty crab cans from Brazil, Venezuela, India and North Carolina, according to court papers.
Jim Casey was charged with a misdemeanor in Newport News General District Court, though the case was thrown out when the state's regulations on repacking crabmeat at the time were found to be merely "guidelines."

Joined Jan 1, 2004
·
11,114 Posts
This has been going on for years . Some other " Chesapeake Bay Bluecrab Crabmeat" picking houses have been caught also.We don't know what we're buying anymore.
S

I prefer to catch my own crabs and fish and not deal with possible bootleg seafood products. I don't trust anyone in the seafood wholesale business....
K

Joined Jan 19, 2007
·
1,816 Posts
Throw enough Old Bay or JO seasoning on crabs or crabmeat and most people won't know where it came from. Add in several drank beers before the meal arrived and I'll bet the customer is happy, LOL. Restaurants deceiving customers has been around for along time, SMH.

Joined Jul 15, 2002
·
2,032 Posts
I have no problem with the imported meat but it should be labeled correctly. I don't believe at this time the Chesapeake could satisfy the regions appetite for crab meat.
A

Joined Mar 21, 2007
·
3,568 Posts
View attachment 171594 I don't even say anything anymore, that I can tell the difference when the crabs are not MD. Chesapeake bay crabs. They don't believe me. I lived in FL. for 15 years. We found a good crab house were the waterman bring the crabs in every day. They were pretty good crabs, but MD. crabs taste much better. When we first went to this place my wife ask. do you steam them like MD. crabs. The lady got kind of up-set and said, :NO HONEY,WE STEAM THEM PEACE RIVER WAY AND WE SHIP MOST OF OUR CRABS TO MD." INHO MD crabs taste better because of the seasons The crabs in MD have to fating up for winter. They catch crabs in FL. all year. No fat in them crabs. They do have nice looking crabs. Here is some FL.crabs.[ The top picture is MD. crabs from Chrisfeild MD.
2

All sorts of tricks get played - years ago crab cakes were cut with boiled Bluefish meat - mixed in with real crab meat.